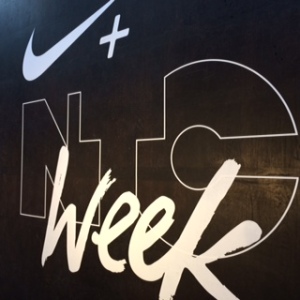 So at 6.15am on Tuesday 20th January I headed to the Ace Hotel in Shoreditch to join another 20+ women to be led on a running tour of East London

I am not sure if it was the cold weather it was -3 when I left home or whether my legs were still tired from my run around the Olympic Park a few days earlier but I really struggled with this run, I expected the group to be mixed abilities but it was obvious that most of the runners where a lot more experienced than me.

That said I loved it, I loved watching the sunrise through the floor to ceiling windows over London, I loved running in a group, winding through the colourful hidden streets & around London Fields & the yoga stretch at the end of the run was certainly very welcome

If you get the chance to try an NTC week session I would definitely recommend it, other sessions included Yoga at the Orbit, Football at Boxpark, Skateboarding at the Southbank & Bootcamp sessions at the famous Barry’s Bootcamp

Or if you just fancy an early morning run around East London you can join Chris Miller every Tuesday morning at 7.30am to join the Ace Hotel Run Club