Sunday 22nd February, should have seen be standing on the start line of a very cold Brighton Half Marathon

I was really shocked when we woke up that morning to see thick ice on the windscreen of our car, as I runner I find I overheat quite easily so dress quite lightly but today I was spectating and I really wasn’t dressed appropriately.

We left the hotel and drove towards the seafront, even thou I wan’t running I was nervous about today I was going to be standing and walking a lot more than I had over the last few weeks, I had looked online and there appeared to be a car park around 1/2 mile from the start, and I had discussed with Jason that as soon as we got across the road and onto the Seafront he should head off to the start line and I would take my time to find the Diabetes UK Cheer Station, sit down etc where necessary.

Getting to the start line was a nightmare and possibly one of the most chaotic starts/race villages I have ever seen, for those of you that know Brighton the race village (actually was there even a race village? If there was I never saw it) and the start were on Maderia Drive, a long straight road that was closed off for the start pens leaving all 15,000 runners trying to walk along a slim pavement that also homed the charity tents, race registration & radio station, this also meant that spectators then were crossing the race pens to get onto Marine Parade to go and cheer on their friends and family, really as there was no actual Race Village that I could see there should have been Marshalls at the start of Maderia Drive stopping spectators going down the road thus easing the congestion and probably preventing a few of the slip and falls I saw as people went over on black ice

As a spectator I didn’t see any toilets either although I presumed there had to be some somewhere on the course, but my husband said he didn’t notice any and I’ve seen a few runners comment that throughout the whole course there was less than a dozen portaloos. Really Brighton Half Marathon on a chilly February morning you are gonna need a lot more than that, people pay a lot of money for these races and train hard for them, if you are caught short and need a loo you’d expect to see some every 3-4 miles & having so few on the course leads to queues which in this weather can cause injuries, it’s no wonder runners squat behind bushes 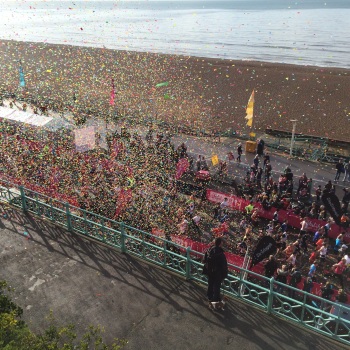 Enough of the complaints & onto the race, Diabetes UK had a spot just overlooking the start/finish and which also put us at the 2 & 6 mile point, the confetti at the start looked amazing from my viewing point high up on Marine Parade.

After I’d seen Beki at mile 6 I decided to try and get back to the finish line, the problem is Marine Parade is much higher up than Maderia Drive meaning you either have to go down around 50 steps or down a very large slope and around a final few steps, neither of these are easy options on crutches, I decided to take the slope very slowly, then a very kind lady helped me down the steps

I was very lucky and managed to find myself a spot along the the last 500ms of the course, and finally after 3 weeks I found probably the only positive for being in a cast, no one wanted to stand to close, they wanted to leave me room to stretch my leg and balance my crutches meaning I had plenty of room to spot friends coming along the course and in those last 500ms I managed to spot almost everyone I knew who was running

If I was a runner if have a final gripe at the 200m point they were letting spectators cross the race to get back over to the ‘race village’ REALLY, there was no reason for spectators to be allowed to cross the course and be on that slim bit of pavement again causing more congestion. In those last few hundred meters you’ll have runners going for a sprint finish, others (like me when I am able to run)  who are just concentrating on continuing to put one foot in front of the other, I have one pace from start to finish, I can’t go quicker I can’t go slower, and more importantly I can’t stop when someone suddenly walks out in front of me

That said everyone I spoke to loved the race, the bling is gorgeous and the course beautiful, was I jealous of all my friends running…… Erm no, I think I make a much better spectator than I do a runner but I still hope to be back out running soon