Did you know Wednesday 9th September was National Fitness Day?

Luckily 2  fitness bloggers I follow PT Mollie and The Fat Girls Guide to Running had organised a 5k run around the Olympic Park in Stratford, East London, so I decided to sign up.

I was a little bit worried about running a whole 5k and running with other people as I haven’t done anything like that since my accident in February, but I needn’t have worried both Mollie & Julie are CiRF qualified and chatted to us as we ran around their pre planned 5k route, they even stayed cool when the route they had carefully planned suddenly became unavailable to us due to an event taking place in the park later that week, instead we made up a new route as we went along I was secretly hoping we would avoid many of the sneaky hills in the park but ended up running up the biggest of them all around the back of the Olympic Stadium.

The run showed me that while I still have to be careful & aware of any niggles, probably my biggest niggle is in my head & things are very much mind over matter for me at the moment & I that need to get over the fear of injury, the boredom of running and walking the same routes and start enjoying running again, losing myself in a run like I did the day of the tube strikes when I got to run along the Embankment (Not letting the tube strikes beat me) so I can enjoy the post run highs. 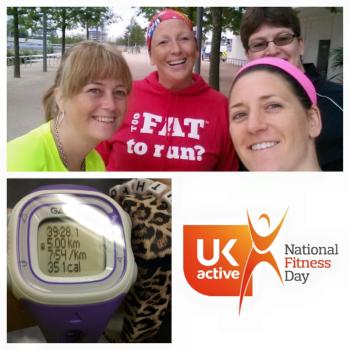 Thanks again to Julie and Mollie for giving up your time to organise the run & for giving me the confidence to enter races again, I know my return to running will be slow and that I may have to do a bit of ‘jeffing’ (run/walking, click HERE to find out more about Jeff Galloway’s Run Walk Run approach) when I race but there is no shame in that & if it helps me stay injury free as Jeff claims it’s definitely something I will be looking into more