Sometimes I wonder why I sign up to events, who wants to walk 13 miles around London on a Saturday night?

You’d have to be crazy right? Plus all the weeks of training, getting up early on a Saturday morning to walk 6+ miles, and signing up when you are recovering from a serious injury and struggling to walk a couple of miles or when you have never even attempted a 5k before, well you wouldn’t would you?..

I think it was May time Mandy & I decided to sign up to the walk, I was recovering from a calf rupture and it was suggested I find a challenge to help with my rehabilitation & Mandy was soon to be returning to work after having a baby and thought committing to a challenge like Shine would help her weight loss

When we signed the walk seemed months away but quickly those 3 training walks a week brought us around to 26th September and SHINE night, our walk was due to stat at 7.30pm so we decided to meet up a little early and head to Zizzi for a spot of carb loading, before we knew it we were in Southwark Park and heading for the start line

The first mile felt very familar to me, we were in Bermondsey and walking along the route of the London Marathon, the next two miles were a little dull, passing industrial units around London Bridge until we reached Tower Bridge, there is something about Tower Bridge and the Tower of London that I find magical, they were both lit up beautifully, add to that the thousands of Shine Walkers & their flashing accessories & signs on their back saying why they were walking it was impossible to not have a tear in your eye, the pride at being part of something so amazing

Soon after Tower Bridge we were at St Pauls & the 4 mile point, water and yogurt coated fruit snacks were being handed out, I had a quick look at my watch at this point and was shocked to discover we had been walking 2 minutes a mile quicker than we had trained at, it had felt quick but not that quick & we made a conscience effort to slow a little not wanting to burn ourselves out 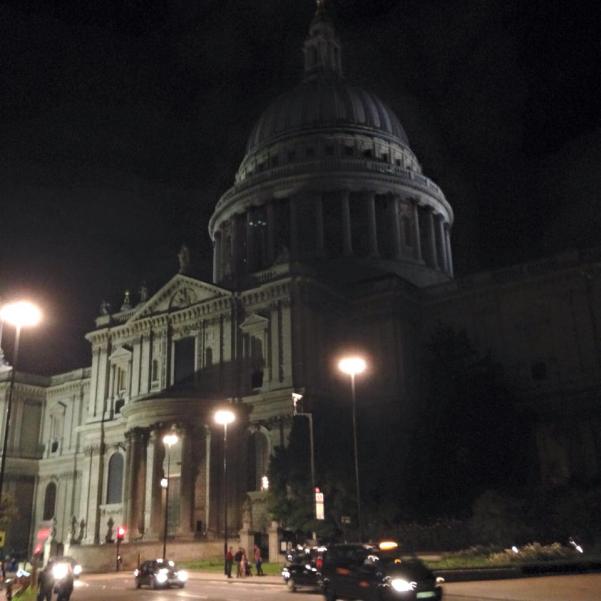 Next we were walking through Holborn, Theatreland & along Whitehall before reaching the half way point

The next few miles were a little boring, around Victoria and onto the Embankment passing Battersea and Albert Bridges & I was so grateful to the volunteers along this part of the route, they had already been standing around for 2+ hours and quite possibly had another 10+ hours ahead of them while waiting for the Full Marathon walkers who were setting off in two waves between 9.30 & 10.30pm, the volunteers were full of smiles, encouraging words and most importantly chocolates

Next up was Westminster and the 10 mile point, for Mandy this was a huge mile stone as the furthest we had walked in training had been 9 miles.

I had done events like this a few years ago but even I was starting to feel the effects of those fast early miles and almost 3hrs on my feet, but knowing we were on the final straight gave me the energy to carry on, without having to indulge in any of the treats on offer at the pitstops

Next was Big Ben & the London Eye, I am not sure what was going on in London that night but as we passed over Westminster Bridge fireworks were lighting up the sky, the next few miles were again very familiar to me, when I worked in the city I would often go for a walk at lunchtime and a circular route from Tower Bridge to Westminster was a regular walk, although even at night its an area heavily populated with tourists its a walk I find very peaceful 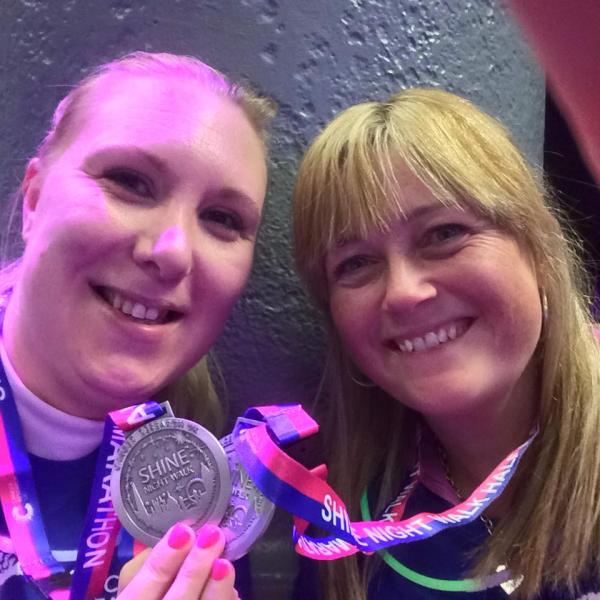 As well as feeling proud of myself, there were times this year when I would never have dreamt that completing a half marathon would be possible but more so I was proud of Mandy, to sign up to something like this is a huge commitment especially when you have to juggle training with work and a young baby & did I mention Mandy had never even taken part in a Race for Life before, as I said at the start, totally crazy & incredibly inspiring

So whats next, well I think its safe to say we both have the bug & Mandy uttered those words that I know are addictive ‘I love the medal’ I predict at least the Half again next year maybe with a few of our members or possibly even the Full Marathon, who knows you will have to watch this space