Do you ever enter a race and instantly regret it, that’s definitely what happened to me with this one, I took part in 2014 & swore never again (you can read about everything that went wrong in my 2014 race here) & then a friend asked me to take part with her and FOMO took over and before I knew it I was signed up again.

I am not sure what I really have against this race, possibly the length of time we spend running around parks but the clue to that is in the name of the race so I can’t really complain, but I will 7 miles of running around the outskirts and zigzagging across Hyde Park is to much!!

So after talking me into signing up again, 3 days before the race my friend unfortunately had to pull out of the race, add to that I haven’t really been running in recent months I was really not looking forward to this, I considered pulling out but I figured I had nothing else to do on a Sunday morning so even if I were to walk the whole event I will have still done more than I would on a usual Sunday.

So I got up as planned and had a few couple of slices of seeded toast with some Jim Jams Hazlenut Spread topped with Strawberries and took a banana with me for the train, as often happens in race day  things didn’t go to plan, my train was cancelled with no reason given meaning I only got to the park 15 minutes before the race started.

The loo queues in the race village were crazy long and when the gun went off for the start of the race there were still 10 people ahead of me (they seriously do not put on enough toilets for the thousands of runners & spectators they have descending on the park, at a guess I’d say they have approx 70 toilets for the 20,000 – 25,000 attendees).

After the loo queue you then have another long queue for the baggage drop, but credit where credit is due, this took less than 5 minutes, they were so organised & I whizzed through the long crowd so I could get to the start line.

Despite arriving in my pen 12 minutes late, I still waited almost 20 minutes to cross the start line.

The first 5 miles of this race are run on the roads, the first time I ran this race we got to run a few miles along the Embankment, unfortunately they have since changed the route so you do an out and back along the Strand (yawnsville, seriously if you have run any other race in London this year, London Winter Run, London 10,000 you will have run up and down the Strand, don’t get me wrong, there are still some impressive sights to be seen, but once you have seen them twice, you do not need to see them a third time, only the British 10k, still goes along the Thames, & suddenly maybe their £50 entrance fee doesn’t feel so bad.

So the first few miles see you run through Green Park, past Buckingham Palace through Admiralty Arch, along Whitehall, turning before you hit Westminster, then you do a u-turn back towards Trafalgar Square before hitting the Strand another u-turn sees you head back to Trafalgar Square, back through Admiralty Arch, along the Mall back past Buckingham Palace before heading back into Hyde Park for 7 looonnng miles.

I hear so many people compare this race to the London Marathon in terms of support and I don’t get it, you have whole stretches of the parks where all you see is marshalls or dog walkers (I love dogs, I really do but having them running around off a lead as thousands of people are running along narrow paths is dangerous, don’t get me wrong, the dog walkers probably use the park every day, we are there once a year, but on mile 11 tired legs my legs will not necessarily stop abruptly when your dog runs out of a bush and in front of me & I don’t want to injure myself or your dog).

All of the above said I did enjoy this race the first 5 miles actually helped me to start enjoying running again, for the first time in a long while my legs felt strong & confident, & while I went into the race untrained and fully expecting a personal worst, at  mile 5 I started to believe I might not be far off my Half Marathon average time of 2hrs 36, unfortunately things then started to go wrong, during the London Marathon I suffered with glute pain &  at mile 5 I was starting to feel a twinge & by mile 7.5 I was in agony every few steps felt like I was being stabbed, so I had to stop, apply some BioFreeze, I had already taken pain killers at mile 5 & continued with a limp/walk, around 11 miles I was finally able to start running again, I have yet to see the official race photos but I channelled my inner Becca & Laura (2 friends that I have run with that always manage strong sprint finishes) I felt like I finished the last 200m strong.(My time was a personal worst, but I am ok with that, it was all I deserved, training to run a Half Marathon & walk a full Marathon 2 weeks apart do not really go hand in hand as my legs were always tired, I am taking away that I still took part when I could have stayed in bed and that I enjoyed running for the first time in a long while so it has given me a much needed confidence boost) 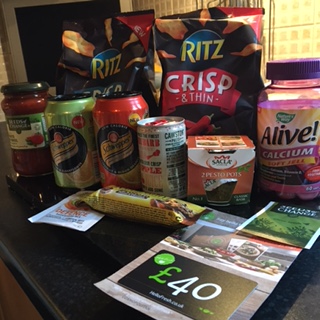 My final grumble is in relation to the goody bags at the end of the race, this race hands out the BEST goody bags in respect of content (seriously look at that haul) but the WORST in respect of the actual bag and the organisation of collecting the bag, firstly you queue for around 20 minutes then you are handed 3, yes 3 A4 size bags and you walk along a line while people fill the bags for you, I understand it takes time to prefill the bags and then there is the issue of storage but they could at least get bags that are an appropriate size (in 2014 we had cloth bags that were kind of half the size of a usual cloth bag so once your bag was full you were just randomly given items the extra items to hold that wouldn’t fit into the cotton bags?! Seriously how hard is it to order appropriately sized bags) 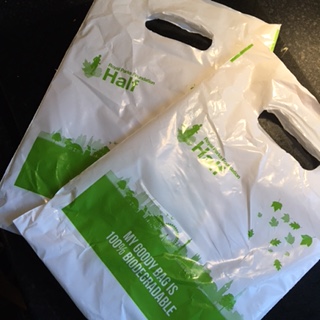 This is definitely my last time running the Royal Parks Half but I would be interested in volunteering next year, as the volunteers really were great both on the course, at the finish line, the baggage tent guys were amazing as were the goody bag people (I think they are probably the two worst jobs) but they were happy, friendly and efficient)

Did you run on Sunday, or have you run Royal Parks before, how did you find it?