First off if anyone is still here I want to wish you a Happy New Year & apologies for my silence for most of 2017.

2017 was a very overwhelming year for me, the year started badly before it had even begun when we lost our gorgeous furbaby unexpectedly on 30th December,  I had already spent that week worrying week as my best friend was pregnant with twins, the pregnancy hadn’t gone well and we knew that one of the twins wasn’t going to make it, there was a very real possibility that the babies were going to be delivered at 28 weeks on the 28th December, but little Luna was a fighter and clung on until Valentines day to ensure her big brother was delivered to his mum and dad safely, sadly Luna lost her fight a few days later

We had always said that when we lost Ernie, we would think about moving house & everyone knows that a home move can be stressful, unfortunately, I had forgotten how stressful. 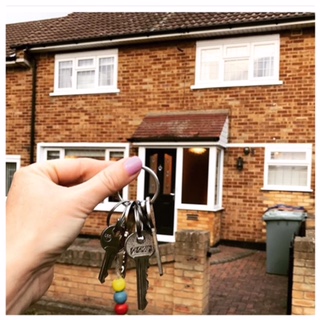 Since we decided to move I struggled to make time for me, there were always solicitors, estate agents or mortgage brokers to call, the walks with friends that I had previously enjoyed first thing in the morning were now replaced by making phone calls or waiting for the phone to  ring, over the last few years I have made a real effort to remove myself from negative situations, I try and avoid conflict and suddenly I was thrown into a world where there were obstacles being thrown at me every day & I found it very mentally draining, there was constant bad news & stern emails to be sent, if I wanted to get things done, I’ve been out of the business world for so long, the thought of that life now daunts me, I was out of my depth and drowning rapidly.

We have now moved home & that has brought with it a whole new bunch of challenges as we redecorate, where most take pleasure in choosing tiles and wallpaper, I develop a knot in my stomach, I have found myself in the kind of funk I haven’t encountered for many years & I’ll be honest I am not coping very well.

This blog was always meant to be a personal diary, so maybe I should have continued to write last year but it would have been very dark & I didn’t want that, its not that I don’t want to be honest, but because at the time I felt writing things down would have taken me to an even darker place.

I usually find writing therapeutic, writing things down can help can help clear the fog in my head, can help me better understand my thought process & I can usually find something positive amongst the words I type, but every time I wrote last year I could see nothing but negativity, the sadness around Ernie & Luna, setbacks with the house, gaining weight, not running etc, writing it down made me feel worse so I decided to take a break, in fact I left it so long I didn’t intend on coming back.

But then last week I read something on Instagram that really hit home to me (unfortunately I can’t reference it as I am not 100% sure where I read it but if  find it again I will share) the person spoke about owning your feelings & not feeling guilt about them, just because you those around you are going through something, it doesn’t diminish what you are going through, & for me I had felt guilt and stupidity about morning the loss of a dog when my friend had lost a baby, I felt guilt and stupidity about mourning the loss of a baby, that’s wasn’t mine or that I never even met (I think I cried more or less every day from mid September when we found out that Luna wouldn’t make it until she was born in February & for several weeks after, there are tears in my eyes writing this)

Why was I so sad? it wasn’t my baby, I’ve never even wanted a baby, I don’t have a maternal bone in my body, how could I possibly understand or be feeling what my friend was feeling & I am not saying I did, I couldn’t possibly know what my friend and her husband went through, but whatever it was that I read on Instagram made me realise it was ok that I felt pain, of course I would, Luna’s mum is my best friend, I know how much her and her husband wanted those babies, yet literally as soon as the excitement settled about her being pregnant we got the sad news that Luna wouldn’t make it & we never knew whether they would lose her naturally via a miscarriage, there was uncertainty as to whether letting Luna’s  journey continue could put her brother in danger, it is impossible for me to articulate the range of emotions I went through.

My relationship with my friend has changed, but its me that’s changed not her, I have backed away, another friend had a baby just before the twins were born and usually I could speak to my friend about the baby, now I feel guilt talking about how well he is doing, my friend would ask me how the home move was going & I would feel guilty talking about that too, my problems compared to hers were so insignificant, but were they, are my problems any less of a problem – to be a 100% honest yes of course they are but as humans we have a huge capacity for compassion & my friend has shown this

During this whole process my friend has always asked how I am getting on, as I have said I felt guilty moaning to her but she often said its nice to talk about something else, she had the capacity and understanding to listen to my problems even with everything else she was going through, she never once dismissed my problems as insignificant, I remember at the time thinking she must be thinking ‘you stupid cow, what I wouldn’t give to have your problems’ but whatever it was I read online made me realise that wasn’t the case, that its ok not to be ok & that your problems your issues may feel like they could be insignificant to the outside world but if they feel significant to you own those feelings & talk about them, feeling guilty about them is probably what has made it harder to move on.

For years I have had a saying mainly around what I eat that guilt is a wasted emotion, and it’s so true, if only I had listened to my own words earlier.

Yes its a new year and there are a million New Year New Me posts about & I suppose in a way this is another one, but I honestly don’t think Id have gotten to this point without what I read last week – it is annoying the hell out of me that I can’t reference it properly I think I know the source but I need to research it more & I promise as soon as I know for definite I will share

So this is where I am at, I am a middle-aged woman who on the face of it has it all, a lovely husband, a lovely home & I’m fortunate that I don’t have to work, yet the reality is I spend my days crying overwhelmed over what colour floor tiles or sofa to order, I know they are ridiculous things to cry over, but I can’t control what causes that knot in my stomach feeling or what keeps me up at night.

I was in a similar funk in 2012 and I made changes then to make myself more of a priority & find my happy again & I am going to commit to the same goals in 2018, I am not going to promise to write each week as positive changes don’t happen overnight but I promise to write when I can, I will write again next week and talk about my goals for the year and what initial steps I plan to take to reach them

If you are still here I am sorry if this post has been a downer but it was time for me to open up & if what I have shared today or share over the coming months helps one person, my battles will have had some meaning

Thanks for listening xx