So better late than never, last month I completed my first City of London Mile

One of the great things about this race is its price tag… its free, yep that’s right, it cost nothing, nada, zilch! and included in that oh so perfect price tag are closed roads, friendly marshall’s, some of the best race organisation I have ever seen, oh and a really nice medal

In respect of races the mile seems to be a pretty untapped distance, I only know of one other mile race the Westminster Mile ran the day before the Vitality London 10,000, I guess people wouldn’t necessarily travel far for such a short distance race, nor would they be interested in handing over to much cash, but I do feel that for the excellent job they do a small fee could be charged for this race even if the race continued to be fully sponsored, so that all entry monies could be donated to charity 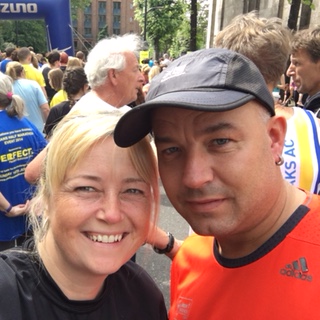 So how did the actual race go, I would love to say it was easy but I would be lying, all week I had been telling anyone that would listen that I would love to have gone sub 10 minute mile, then Saturday it suddenly dawned on me I had been struggling to achieve 11-11.30 minute miles recently so how on earth did I expect to shave over a minute off that time

So on Sunday morning as I headed to the race I was feeling pretty downbeat, wishing I had kept my mouth shut all week, a sub 10 may have been out of my reach but whatever the result I was determined I would have tried my best

As I have already mentioned the race was perfectly organised I was in wave 8 and at most races that would generally resulted in us starting our race a few minutes late, but not at the City of London Mile, we started bang on 11.10am, the first few minutes was spent the same as any race, weaving in and out, until I found a bit of space on the road and could find my own pace, I took a quick look at my Garmin just as I was passing the half way point at my watch showed bang on 5 minutes, I was happy with how I was running and how I was feeling, before I knew it I was turning a corner again at Bank and was on the final 400m to the finish line along Cheapside, there was a slight incline in the road, I felt like everyone was passing me, my legs were getting tired and usually my brain would be telling me it was ok to stop and walk for a second but I really wanted to run this mile, I could hear a father and daughter that I had passed earlier on, the daughter was struggling but the dad was encouraging her, just a little bit further, now is the time to dig deep to push a bit harder to go a bit faster, I should have listened to the advice myself but I couldn’t help but laugh and think go a bit faster, who are you kidding, just don’t stop more like, and then I was over the finish line, as I turned to stop my Garmin I spotted the time and it was under 10 minutes, I couldn’t believe it, the second half of the race had felt so much slower than the first, I was convinced I was running slower but I had actually been quicker

So proud of us both, I managed a sub 9.30 (less than 30 seconds off my PB when I was in a much fitter/healthier condition) and the husband managed a sub 8.30, not bad for his first run since the London Marathon 2015